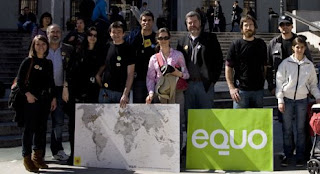 There are times in history when the conditions are given for change to occur. 1789 in France was one of those. Now is another one.

People are unhappy about the way things are going, about where we are heading to if nothing is done, if the “business as usual” path is continued. Widening social and geographical inequalities (80% of the world population controlling 20% of the global resources), the accelerated degradation of the environment, the difficulties of the youth to access quality employment, the negative spiral marginalized groups and other minorities are falling into, the increasing hostilities towards immigration in rich countries, racism, homophobia … you name it.

The so-called world leaders have not delivered on their promise, have not kept up to their words, and have not listened to their people but to the interest of a few. Seems like they had agreed on reducing poverty (know about the Millennium Development Goals?), on fostering clean & renewable energies, on fighting Climate Change (18 years hearing about this potentially devastating menace and still no fair, ambitious and binding agreement has been reached on the international arena … maybe at the COP17 in Durban this November?), on regulating financial markets and “humanizing” capitalism, on strengthening democracy … but yet they keep ceding to the pressure of oil bucks, of multinationals seeking nothing but their own self-interest, of the few rich and powerful eclipsing the rights of the many others, etc.

The “crisis” we are experiencing these days does not seem to be a mere passing valley on a cyclical economy but a deeper hole in the very foundations of our socio-economic model. It is indeed a crisis of that very thing that used to define us and set us apart from other species: our human values. It is the end of the “for me“ sort of philosophy (the individual benefit) and the emergence of the “for all” type of vision (the social or common benefit). Almost three centuries on, it has turned out that the “invisible hand” was never quite there to sustain us. It has turned out that love for one another is the only universal true and the way forward.

There are times in history when sufficiently “dry” conditions are given so that, the right spark set, revolutions ignite on the streets. Revolutions that seek and eventually change the face and roots of our world forever. Turning points that make impossible things become possible. Now is one of those times.

And I don’t say it out of the blue. I say it because I have seen it. I have seen the youth screaming for change. The upcoming generations to which I proudly belong, we could have gotten a bit lost along the way, back when our parents were enjoying the short-lived and privileged comforts of capitalism, back when we didn’t have a cause to fight for. But now, we have it just in front of us, and it is so threatening and imminent that is pushing us against the wall, drowning the future of those who will succeed us if no course of action is undertaken. There is no way around it. We have to stand up, join our forces and fight. Fight for what we believe in: our equal rights and opportunities, our children and grandchildren, our HOME PLANET and the HARMONY we have disrupted.

I have seen it with my own eyes and touched it with my bare hands. Right here in Spain as well as all over the rest of the world: “developed”, “developing” and whatever you want to call it.

I have seen entrepreneurs and visionaries launching and developing projects with the sole aim of improving the lives of the people around them and/or the environment that nurtures them. I have seen and participated in the art of inter-connecting, inspiring and empowering them to pursue their dreams.

I have seen youngsters organizing and mobilizing. I have seen the motivation and hope in their eyes, the willingness to take their destiny in their own hands and turn around what many touted as a “blurred-looking” future. They were waiting for this opportunity to speak out their minds and have a say in the construction of our society.

It is time for a new global model rooted on the “I” and the “We”. I do and we do. A new peaceful and more democratic world order revolving around what really matters: us, the people and this, our planet. It is time to push democracy forward, real democracy that is, the one that hands the power back to the people and reclaims equality in rights.

There is electricity in the air. I can feel it. I don’t know what the future will bring, but I do know that it will be different, and that it is up to us to shape it. I know that today is the beginning. The beginning of …